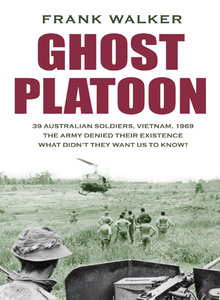 In 1969 a ragtag unit of 39 men were thrown together at Nui dat, Vietnam. It didn't even have an officer or sergeant in charge. A rugged ex-Royal Marine, acting corporal, stepped forward to take the lead. The platoon found itself involved in a high-risk ambush and under Riddle's leadership, came through unscathed, leaving a trail of enemy bodies behind. Yet afterwards, the platoon was disbanded and the army then spent decades denying the unit had even ever existed.

More than forty years later, Frank Walker details what happened at that ambush and why the army buried their existence, and the secrets that went with it. His findings are a shocking indictment of the long-term effects of war.

If you are looking for a book full of heroic, Gallipoli-esque mythology of the Anzac digger, then this is not the book for you. This is an ugly, nasty story. Sadly, it is also a true story.

Walker has used his years  of journalistic experience to dig deep into this story of why Defence officials for decades denied the existence of this single platoon. And it is not a pretty picture.

Some of the material received during the investigation simply beggars belief. For example, there is no sign of an official Headquarters diary covering the activities of this unit and this time frame. Among the excuses subsequently offered up for this inexplicable absence, was the suggestion that perhaps the HA staff concerned were not aware that they needed to keep a diary. What complete, utter nonsense. And I am being exceedingly polite with that description.

Another serious alarm bell goes off when it is revealed that the service records of some of the soldiers concerned, suddenly show them being transferred to another battalion – when no such actual transfer ever took place. It was a simple fabrication.

The continuing denials etc arose out of Defence concerns way back in 1969 that these soldiers may have been involved in what may be seen as an atrocity, born out of circumstance. That would never have done at a time when the Vietnam War was becoming increasingly unpopular in Australia.

In tracing the stories of a number of the soldiers involved in this platoon and the battle, the truly awful effects of war on the frontline infantry soldiers in Vietnam are seen only too badly. Alcoholism, depression, violence, inability to cope – these poor bastards wore the lot. Not much of a reward for what was still essentially voluntary service, even among the conscripts who still had to volunteer for overseas service.

This is not a history as such but it is still a factual story backed up by witnesses and other evidence.

It was not an enjoyable read. Parts of it are simply too raw to be enjoyable. But it is essential reading for anyone wanting to understand what these soldiers went through in Vietnam and the aftermath for many. And it is also an eye-opening indictment of how politics of the day can echo on decades later.

Bureaucratic cover-ups and sly tricks are certainly nothing new. In order to save a few bucks on future war pensions, bureaucrats had my grandparents sign documentation stating my uncle was being discharged fully fit in 1944. All my grandparents wanted was their son back home again and signed anything to make it happen. In reality he was a complete mental case from PTSD and never worked again. No pension. No support. Just a few medals and a flag on his coffin when he died in 1965 at age 42.